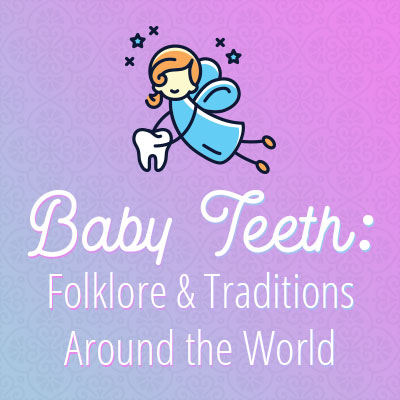 What parents do with their children’s baby teeth varies from family to family. Some save them, some throw them away, some make a craft project or a keepsake from them. Recent research is even exploring the possibility of having parents store their children’s baby teeth to preserve mesenchymal stem cell content in the event the child develops cancer or certain other illnesses in their future. Just for fun, Houston wants to discuss some history of baby tooth traditions around the world.

Every human culture in documented history included rituals around the disposal of a child’s lost baby teeth. Researchers in the early 20th century summarized them to include:

The most commonly practiced ritual—recorded from Mexico to Russia to New Zealand—was to offer the lost baby tooth as a sacrifice to a mouse (or rat) with the hope the child’s adult teeth would be as strong as the rodent’s, usually accompanied by a prayer or song.

Another strong-toothed animal could be substituted for mice or rats according to research, which revealed similar ceremonies that incorporated cats, squirrels, beavers, or dogs—but the mouse remained the most common by far.

Ever Heard of the Tooth MOUSE?

In many countries around the world, children still believe in the Tooth Mouse. Spain, Guatemala, Venezuela, Colombia, Peru, Chile, and Mexico put lost teeth under pillows, expecting money or gifts left by “El Ratoncito Perez” or several variations that translate to “mouse who collects teeth.”

Kids in Argentina leave their teeth in a glass instead, still expecting a visit by a magical, thirsty rodent who leaves a treasure while they sleep. In France and Switzerland, La Petit Souris (“Little Mouse”) is the name of the rodent that whisks away discarded baby teeth for cash or candy.

In South Africa, the tooth is left in a slipper for the Tooth Mouse, who leaves a gift behind. Other countries who offer their baby teeth to the Tooth Mouse during the night expect nothing in return but the guarantee of a strong, healthy new tooth in their future.

Where Did the Tooth Fairy Come From?

Researchers believe modern-day “tooth fairy” customs—observed by the United States, Canada, England, Australia, and Denmark—combine the “tooth mouse” myth with the idea of a “good fairy”—a concept from English children’s literature and expanded on by media like Disney movies.

The motif of relationships and financial exchanges between people and benevolent fairies has been around for many years, but the idea of a tooth fairy has likely persisted as a source of comfort to kids who could be a little scared by losing their teeth. (We understand that fear here at Dassani Dentistry!)

In Greece, Vietnam, Singapore, India, Sri Lanka, and China, children throw their baby teeth on the roof when they fall out. Kids in Greece wait for a mouse or pig to retrieve it, young Sri Lankans await a squirrel, while in India, anticipation is for the return of a sparrow bearing a new tooth. Cherokee Indian children throw the tooth on the roof, repeating, “Beaver, put a new tooth in my jaw!” four times.

In some Middle Eastern countries such as Iraq, Jordan, and Egypt, kids are encouraged to toss their teeth up toward the sky. Brazilian children throw teeth outside for birds, who they believe will only take them if they are clean, while kids in El Salvador expect a rabbit to swipe their tooth, regardless of its cleanliness.

Give a Dog a Tooth

Throughout Central Asia, baby teeth might be put into fat and fed to a dog with the wish that the child’s replacement tooth will be as strong as the dog’s. If there is no dog available, the teeth are buried near a tree so that the new tooth will have strong roots. Some Alaskan tribes also feed baby teeth to a dog with similar intentions.

Some Central American countries fashion jewelry from lost baby teeth, a tradition said to originate from ancient Viking customs where articles belonging to children were regarded as powerful, good luck, and sometimes carried into battle.

…Or a Family Tree

The children of the Yellowknives Dene First Nation tribe of Canada give lost teeth to their mother or grandmother, who place the tooth in a tree. The family then dances around the tree together to encourage the tooth to grow in as straight as the trunk.

Food for thought, huh? Contact Dassani Dentistry in Houston today so we can take the best care of your little one’s baby teeth… we’ll let you decide what to do with them when they fall out!

The content of this blog is not intended to be a substitute for professional medical advice, diagnosis, or  treatment. Always seek the advice of qualified health providers with questions you may have regarding medical conditions.

Dr. Meghna Dassani received her initial dental training from the University of Mumbai, India, where she graduated in 1996 as Bachelor of Dental Surgery (BDS). After working as an associate for one year, she established her own practice in Mumbai, India. She successfully operated this practice for six years prior to moving to the US. When Dr. Meghna Dassani is not in the office she is at home being a mommy to her 2 beautiful girls and enjoying time relaxing with her husband. Since opening her own practice in 2011 she doesn’t have a lot of free time but when the time allows she enjoys traveling, reading, gardening, cooking, visiting with friends and family and of course SHOPPING with a Starbucks in her hand!

« Benzocaine is Not Safe for Teething!
Does Your Child Have Painful Sores in Their Mouth? This Virus Could be the Cause »

Did you find this article helpful? Share it to social networks by clicking on an icon below.

To request an appointment, please call us at (281) 667-4070 or click on the button below to provide your contact information and preferences for the day and time of your appointment.

Your Options for Teeth Straightening

Why Kids Get Yellow Teeth

Send us a message

Thank you. We have received your request and will be in touch with you shortly.